One of the buzzwords that you cannot seem to get around lately is “Artificial Intelligence”. It seems like every company and every influencer in the tech sphere is talking about its potential and what it will do for us in the future.

Today, machines are already partially aware, which means they are able to improve learned actions by themselves, but they still need interaction with humans and human teaching in order to learn something new. The next and final step of AI development will be fully aware machines, which can teach themselves without any prior information. But this step has not been reached yet.

72% of business leaders say that AI will bring about a business advantage. It is expected that US$15.7 trillion in value will be added to the economy by 2030 from AI productivity and personalization. Thanks to AI technologies, 2.3 million jobs will be created and 75% of customer interactions will be managed by AI by 2020. 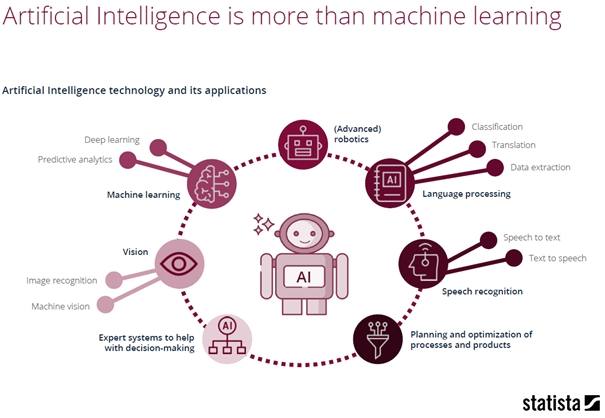 Use cases of Artificial Intelligence

Although the concept of AI sounds futuristic, it is actually already used by many companies. Many start-ups and established companies are working on bringing AI applications to the market or use AI for their own products and processes.

In the technology sector, 32% of companies were already using AI technologies in 2017. While the use of AI is already high in technology-dependent sectors, it will most likely have the highest impact in the travel industry, where AI could increase the industry’s revenue by up to 11% by 2025. Yet, only 11% of all travel and tourism companies had adopted AI technologies in 2017. In the medicine industry, the most promising applications of AI are robot-assisted surgeries with a potential annual value of US$40 billion by 2026.

Well-known examples of companies already using AI for their products are Amazon with Alexa’s language processing or Tesla with its autonomous driving features. The Chinese news and information content platform Toutiao by ByteDance is using AI to create and determine users’ news timeline based on previous and current usage behavior and is also providing content created only by AI. 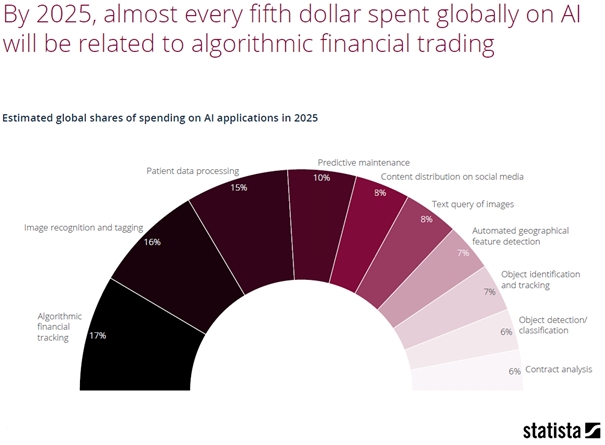 The increasing application of AI technologies will lead to a huge rise in global revenues made with AI applications from only US$7 billion in 2018 to US$90 billion in 2025. The majority (45%) will be made in North America, followed by Asia-Pacific (24%) and Europe (23%). Furthermore, AI has the potential to increase labor productivity. It is expected that the labor productivity in Sweden, Finland, the U.S., and Japan will rise by at least a third in 2035.

Asia in general and China in particular are already very established in the AI market and will continue to grow in the future. The Chinese government revealed its plans to become an AI-first economy and the world leader concerning AI application and implementation by 2030 with a US$148 billion AI industry. In 2017, the main focus of AI companies in China lay on computer vision (35%), voice recognition (25%) and natural language processing (21%). 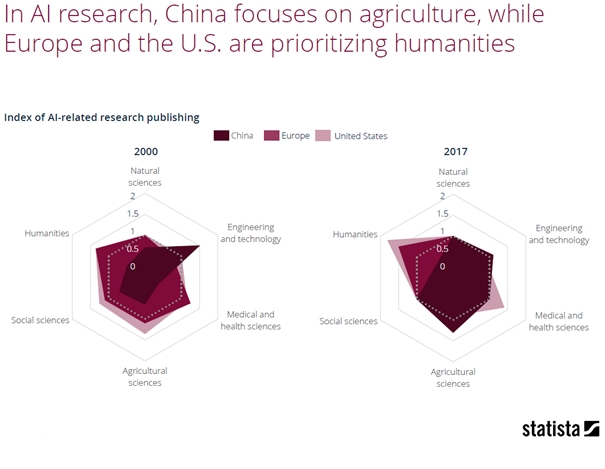 With an additional US$7 trillion in GDP by 2030, China will most likely also be the biggest winner of AI implementation in terms of economic gains, followed by North America with only US$3.7 trillion. Europe and the rest of the world are lagging even further behind. Still, IBM and Microsoft are dominating the AI knowledge landscape by holding 7,151 and 6,501 AI patent applications respectively.

With global enterprise investments rising from US$12 billion in 2018 to US$232 billion in 2025, investing in AI is becoming increasingly relevant. While the overall AI market is of great interest to companies and investors, machine learning has been the most prominent application of AI so far. It attracted 62% of the overall AI investments in 2017, and the vast majority of AI start-ups are focusing on it.

Global funding for AI companies made a huge leap in 2017, reaching US$15 billion. While companies from the United States received most of the deals in the past, their share is continuously decreasing. The top 3 highest-funded start-ups ByteDance (US$3.1 billion), Sensetime (US$2.6 billion), and UBTECH (US$0,9 billion) are from China.

But not only investors are betting on AI: Many large tech companies are developing AI applications or acquire start-ups active in the AI field: Apple, for example, has acquired 16 AI start-ups since 2010, the best-known being Siri, which it acquired in 2010. In the same time period, Google has acquired 15 AI start-ups. All this shows that large tech players and investors are considering AI to be an important technology for the future.