Today’s world and its future are built on data. Users and companies are more and more interconnected. Additionally, there is a shift from being offline to always being online. Both developments have led to the creation of an incredible amount of data that is growing exponentially.
While many companies already try to make use of their customers’ data, the implications of using Big Data cannot yet be fully assessed. Companies that are able to put their data to use will have more business opportunities and improve their current production and distribution models.

A data-driven world is based on aggregating and working with all the collected input. The more advanced the data processing systems become, the better their output will be. When used properly, large data sets can improve decision-making and business processes, help with innovations, and lead to personalization in sectors such as entertainment, healthcare, or financial services.

One of the main challenges regarding the use of large data sets is finding ways to store and later analyze them. The total amount of data generated in 2018 was 33 zettabytes – this is equal to 660 billion Blu-Ray discs, 375 million times the internet’s size in 1997 or 33 million human brains – and it will grow exponentially to more than 2,100 zettabytes in 2035.

Cloud storage will overtake device storage in 2019, with Amazon dominating the industry with a market share of 33% in Q1 2018, followed by Microsoft Azure (13%), IBM Cloud (8%), and Google (6%). Nevertheless, Microsoft and Google are threatening Amazon’s top place by massively acquiring companies from the cloud sector: Since 2013, they have acquired each twice as many companies (24) as Amazon (12).

Data security – Is blockchain the key?

With the growing amount of data, the need for security measures and safe data storage increases as well. Besides Cloud storage, Blockchain establishes itself as a storage solution to safely handle large data sets. As many investors started to realize its potential, the investment sum for Blockchain start-ups increased by almost 300% from 2017 to 2018 and reached 3.9 billion US$. 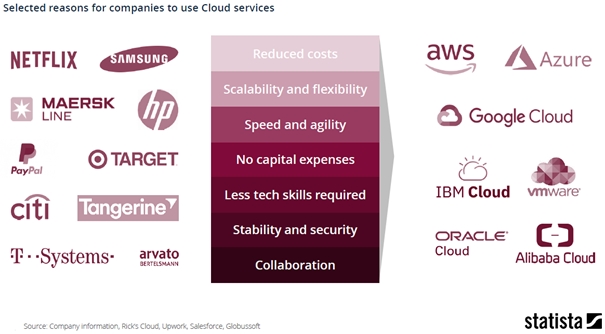 Although Blockchain and Cloud storage can increase the safety of data sets, there is still a large threat of data breaches and malicious usage of data. Such data breaches are not uncommon and extremely expensive for the companies affected. The more personal the data, the higher the costs for companies to retrieve the data and repair the damage to their public image. The average cost per capita of a data breach in the health industry reaches $408 and is followed by the financial ($206) and services ($181) industry.

Value of data – the more private, the more expensive

However, it remains unclear to customers what the companies are using their data for and what the value of personal information is. It may come as a surprise that information regarding demographics or occupation is not nearly as valuable to companies as one might think. Instead, data on health conditions fetches the highest price per data point ($0.37) and family-related data points come up second ($0.32). This is due to the private and sensitive nature of these issues and because they might entail certain purchase intentions which companies can use. 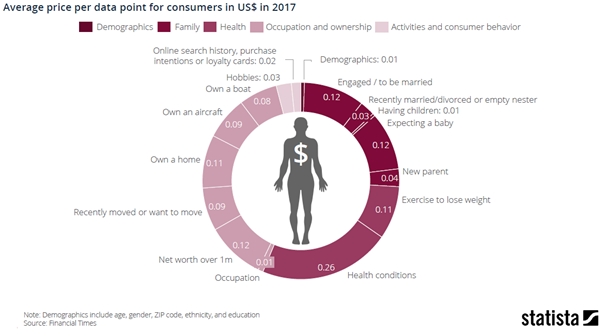 Apart from the threats mentioned above, extensive data collection also has some pleasant consequences for consumers. These include personalized purchase recommendations or content that is created especially for certain target groups. Both are highly valued by customers as they improve the shopping experience or the satisfaction with entertainment services. Many consumers are willing to share their data if they receive better-fitting ads in return – this applies especially to Chinese, Indian, and Mexican customers. By contrast, only 19% of German and French customers are willing to share their data for personalized ads. The result is that ad spending in France and Germany mostly goes to non-programmatic ads, while especially the Netherlands and the United Kingdom spend much more money on programmatic ads. 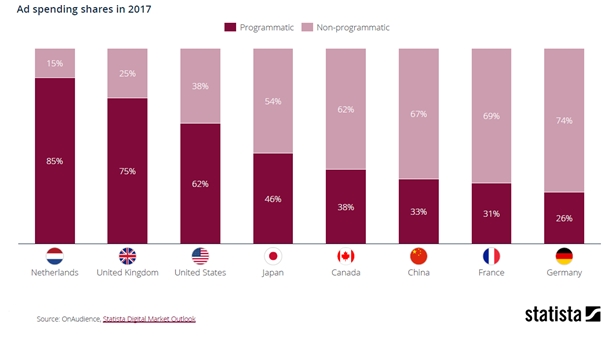