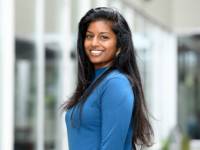 Gina is Forensic IT Expert at Fox-IT’s Forensics and Incident Response department. Before Gina came to work at Fox-IT, she graduated with a double Master’s degree at the University of Amsterdam. She studied Artificial Intelligence (AI), which she really enjoyed: "ICT combined with psychology, simulating the mind of a human being on a computer." After her bachelor's Artificial Intelligence she started the Master with a specialization in Forensic Intelligence. However, the emphasis was not on Forensics. Therefore she chose a second master Forensic Science, where I learned all about DNA, fingerprints, trace evidence and forensic processes.

At Forensics Gina works on digital forensics, but also gives a lot of training and helps with e-discovery cases. The work at Forensics is very diverse. If a client calls when an incident occurred, we must act quickly. Gina first conducts an intake interview with the client, and then draws a plan of action. If the client agrees, the data will be secured in the Fox-IT lab. When that's done, the real investigation can begin.

Gina also worked at the Managed Security Services (MSS) department for a while. “The MSS department monitors 24/7 our clients’ systems and networks. They detect, investigate and resolve cyber threats and suspicious activity, such as hacking, data leaks or virus outbreaks. I helped MSS redesigning a system that handles large amounts of data. My knowledge of artificial intelligence algorithms was very useful to analyze and recognize data patterns.